The Burrunan dolphin (Tursiops australis) was only formally identified and named as a new dolphin species in 2011, following multiple lines of genetic and morphological evidence (Charlton-Robb et al. 2011). The species is characterised by small, isolated and genetically distinct populations in Victoria, Tasmania and South Australia.
The Burrunan are not found anywhere else on Earth! 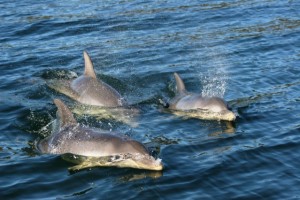 With only two known resident populations in Victoria (Gippsland Lakes and Port Phillip Bay), the Burrunan dolphin is already listed as ‘Endangered’.
Burrunan is the Aboriginal name given to dolphins meaning ‘‘name of a large sea fish of the porpoise kind’’. The Burrunan dolphin is about 2.5m in length and has a distinct tri-colouration pattern, from dark grey on the upper side of the body, a paler grey midline and cream underside. The cream underside can extend over the eye, whilst the grey mid-line forms shoulder blaze (a brushstroke pattern) below the falcate (curved) dorsal fin. The Burrunan has broad tail flukes, a prominent rounded head and a short stubby rostrum (nose).

Risks and threats to the Burrunan Dolphin

Unfortunately the biggest threat to the dolphins and their environment is us! Inappropriate vessel approaches can disrupt core biological activities, such as feeding and resting.

Mothers and calves are more at risk, as calves spend more time at the surface and can be more inquisitive, thus are more prone to vessel strikes. Dolphins are wild animals and need the choice to interact with us on their terms! Reduce speed, do not directly approach and look for signs of avoidance, such as changes in direction, behaviour and/or tail slapping.

Fishing waste (line, hooks and sinkers) can cause entanglements. Dispose of your fishing waste thoughtfully. Habitat loss or degradation is another important aspect. Whilst we can choose not to swim, the dolphins can’t. They rely on a pristine environment to survive. Each year, 12.5 million metric tonnes of plastic enter our world’s oceans! Let’s rethink our overuse and over reliance
on single use plastics.

Guide to Safe Boating with the Burrunan Dolphin

Our friends at the Marine Mammal Foundation have created the Guide to Safe Boating with the Burrunan. It’s packed full of interesting information about this iconic species, as well as vital information for people using the Gippsland Lakes.