The past year has been a boomer of a breeding season for frogs in the Gippsland Lakes and things are only going to get better with the construction of new ‘frog bogs’ to supply critical habitat and refuge for endangered species.

Enhancing Connectivity and Condition around Lake Wellington Program was allocated $1.6 million over three years and will enhance eight of the highest priority wetlands within the Lower Avon /Perry River area – a key refuge for Green and Golden and Growling Grass Frogs within the Gippsland Lakes. Works will enhance refuge and breeding sites to support the current known populations of frogs, and support breeding to increase their distribution within the Clydebank Morass wetland complex.

Marty Potts, Program Specialist for Greening Australia, is one of the partners leading the program and, over successive projects, has seen frog numbers steadily improve.

“Studies in 2016, showed we were down to 80 individuals of Growling Grass Frogs left in the Gippsland Lakes Ramsar wetlands system,” explained Marty. 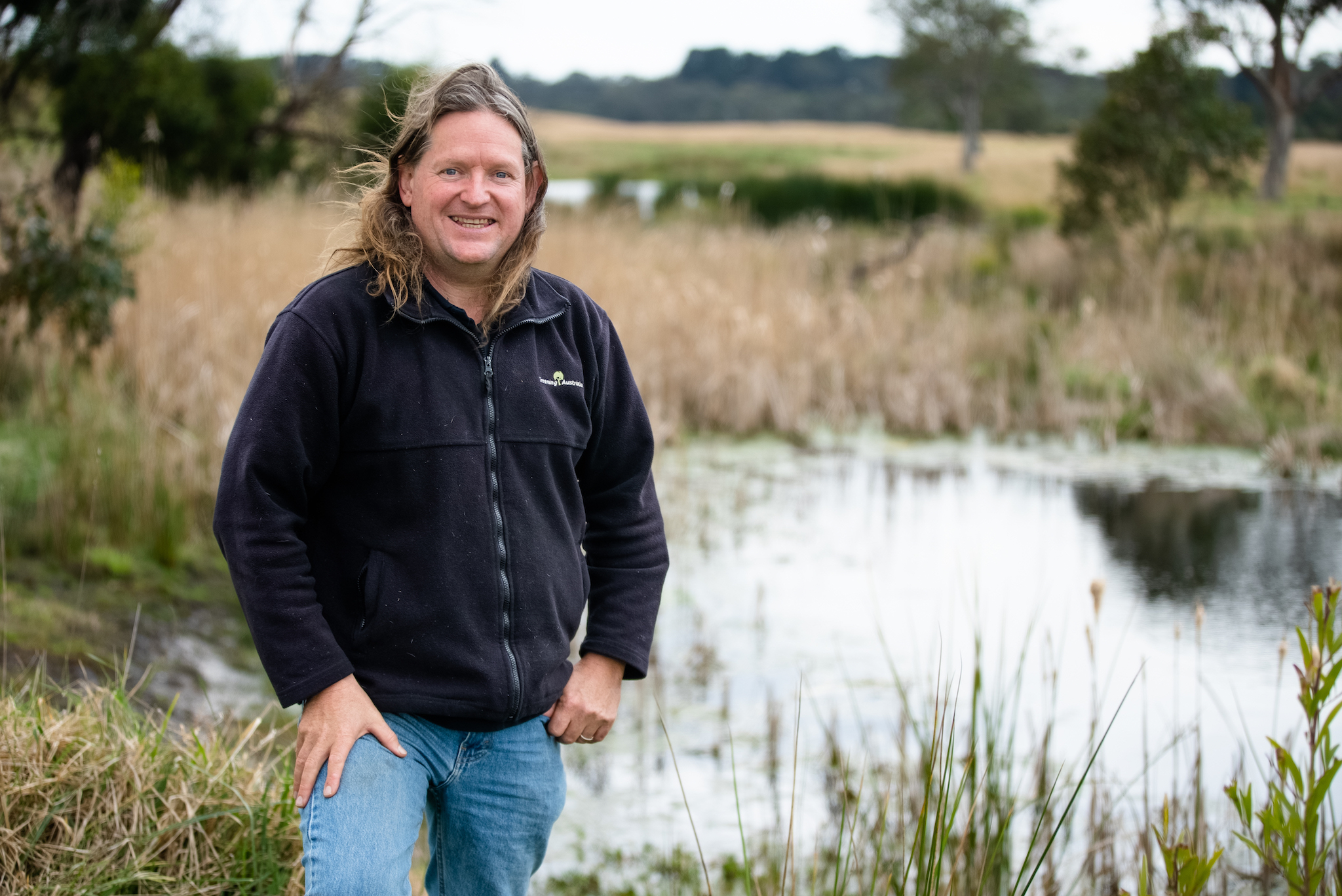 Marty and team have just commenced works to create ten extra ‘frog bogs’ on private land currently used for grazing cattle. The area was selected from 52 sites as a ‘hotspot’ for endangered frog breeding within the Lakes ecosystem. A total of 13 new frog bogs will link this prime habitat with other prime habitat so frogs can disperse out into fringing wetlands and the Gippsland Lakes.

Frog bogs are essentially ‘mini wetlands’ specifically designed for frogs’ needs and will be built to National Bellfrog Recovery standards as set by DELWP.

“They may look just like holes, but they create multiple depths and habitats. Multiple habitats create niches for all frogs to thrive – from young to old,” said Marty. 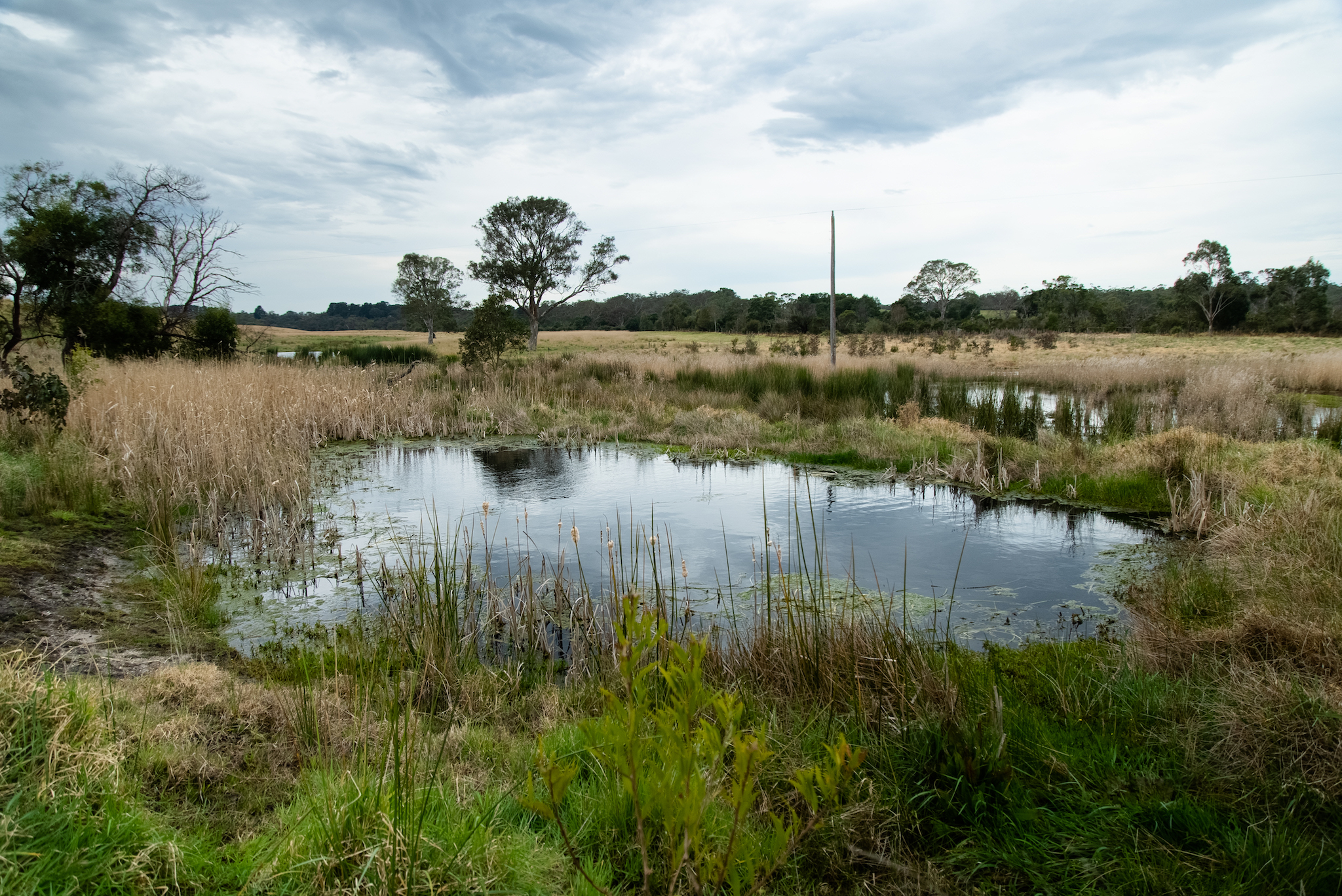 Deep areas of up to two metres allow tadpoles to grow and shelter away from predators. They can then move into the shallow areas to safely feed.

“There will be water plants added, along with rocks for the frogs to bask in the sun. Frogs’ temperature is regulated by the environment, so they can heat up and be more active. Also, the water around the rocks destroys dangerous fungus. So – it’s a little hot water bath for the frogs!”

Over the next two years, Marty and team will complete earthworks for the bogs, revegetate and fence them to completely transform the site into prime frog habitat. The team will then undertake monitoring in the summer months through night surveys to record the impact of this new habitat on the population.

The Enhancing Connectivity and Condition around Lake Wellington Program is one way of future proofing the Lakes by adapting existing habitat to find new value for the land and to provide flora and fauna with ‘room to move’ as conditions change.

“We need to provide refuges for the harder dry times – 13 more ponds here will give refuge in the drier times. Frogs of the Gippsland Lakes tell us the health of the waterways and fringing wetlands. I love being part of the Love Our Lakes team to work together to understand way to help to see these frog numbers rebuild.”

Updates will be provided on www.loveourlakes.net.au