Get a glass of water and take a good long look at it. Guess how old you think the water is?

The journey that water takes is called the Water Cycle. Water continuously changes state from liquid to gas and to a solid as it travels around Earth. The water we drink today could have come from lakes in Africa, top of Mount Everest or the glaciers in Chile, South America.

The answer to your question is this…there is only a limited amount of water on the planet, so the water we see today has been cycling around since Earth was formed.

We may not drink the water in the Gippsland Lakes but we do use the water that travels down the rivers that feed the lakes with freshwater. It is important that we conserve and look after our water sources, not only for us, but also for all the other users (both plant and animal) that rely on the Gippsland Lakes for survival.

Freshwater and Saltwater in the Lakes

Before the artificial entrance was cut in 1889 river floods built up the level of the lakes until water spilled out across a low-lying section of the outer barrier. In dry weather low river flow and high evaporation lowered the lake level and the outlet would become sealed by sand deposition.

Spring tidal range at Lakes Entrance is about a metre, but tidal movements are not transmitted far into the lakes. Tidal influence at Metung for example is only about 10cm. The further west into the lakes system you go, the greater the water height is influenced by weather conditions rather than by tides.

After heavy rain and river flooding the level of the lakes rises and water pours out of the entrance, even against the incoming tide.

Salt loads in the Lakes

Salinity conditions in the lakes are largely determined by the fresh water from rain and rivers flowing into the lakes and salt water flowing in from the sea.

Salinity at the surface of the lake is generally less than salinity at depth, particularly in calm weather.

The salinity of the Lakes has a big influence on the plants and animals that live in and around the lakes.

As wind blows across the Gippsland Lakes, the water is pushed in the direction of the wind. The water builds up against the end of the lakes until it either drains through the entrance or the wind abates. 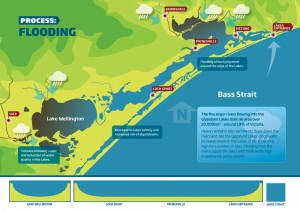 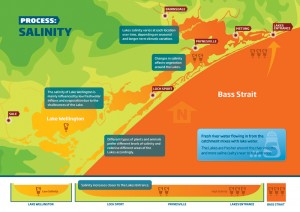 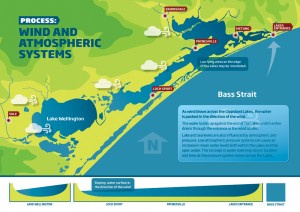